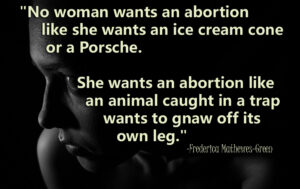 Ironic that the quotation in the picture is from Frederica Mathewes-Green, an anti-abortion, religious author. With this statement, she  unwittingly came up with the best rebuttal against her very own side of the argument.

“Abortion indisputably ends a human life. But this loss is usually set against the woman’s need to have an abortion in order to freely direct her own life. It is a particular cruelty to present abortion as something women want, something they demand, they find liberating. Because nobody wants this. The procedure itself is painful, humiliating, expensive — no woman “wants” to go through it. But once it’s available, it appears to be the logical, reasonable choice. All the complexities can be shoved down that funnel. Yes, abortion solves all the problems; but it solves them inside the woman’s body. And she is expected to keep that pain inside for a lifetime, and be grateful for the gift of abortion.”

Many years ago I wrote something in an essay about abortion, and I was surprised that the line got picked up and frequently quoted. I’ve seen it in both pro-life and pro-choice contexts, so it appears to be something both sides agree on.

Strange, isn’t it, that both pro-choice and pro-life people agree that is true? Abortion is a horrible and harrowing experience. That women choose it so frequently shows how much worse continuing a pregnancy can be…”  –  Frederica Mathewes-Green